When configuring memory in Dell PowerEdge 14th Generation servers the end users expect each server to function at peak performance.

The Intel Xeon based processor has a built-in memory controller like previous generation Xeons but now supports “SIX” memory channels per socket (see Figure 1.). This is an increase from the four memory channels found in previous generation Xeon E5-2600 v3 and E5-2600 v4 processors. Different Dell EMC server models offer a different number of memory slots based on server density. 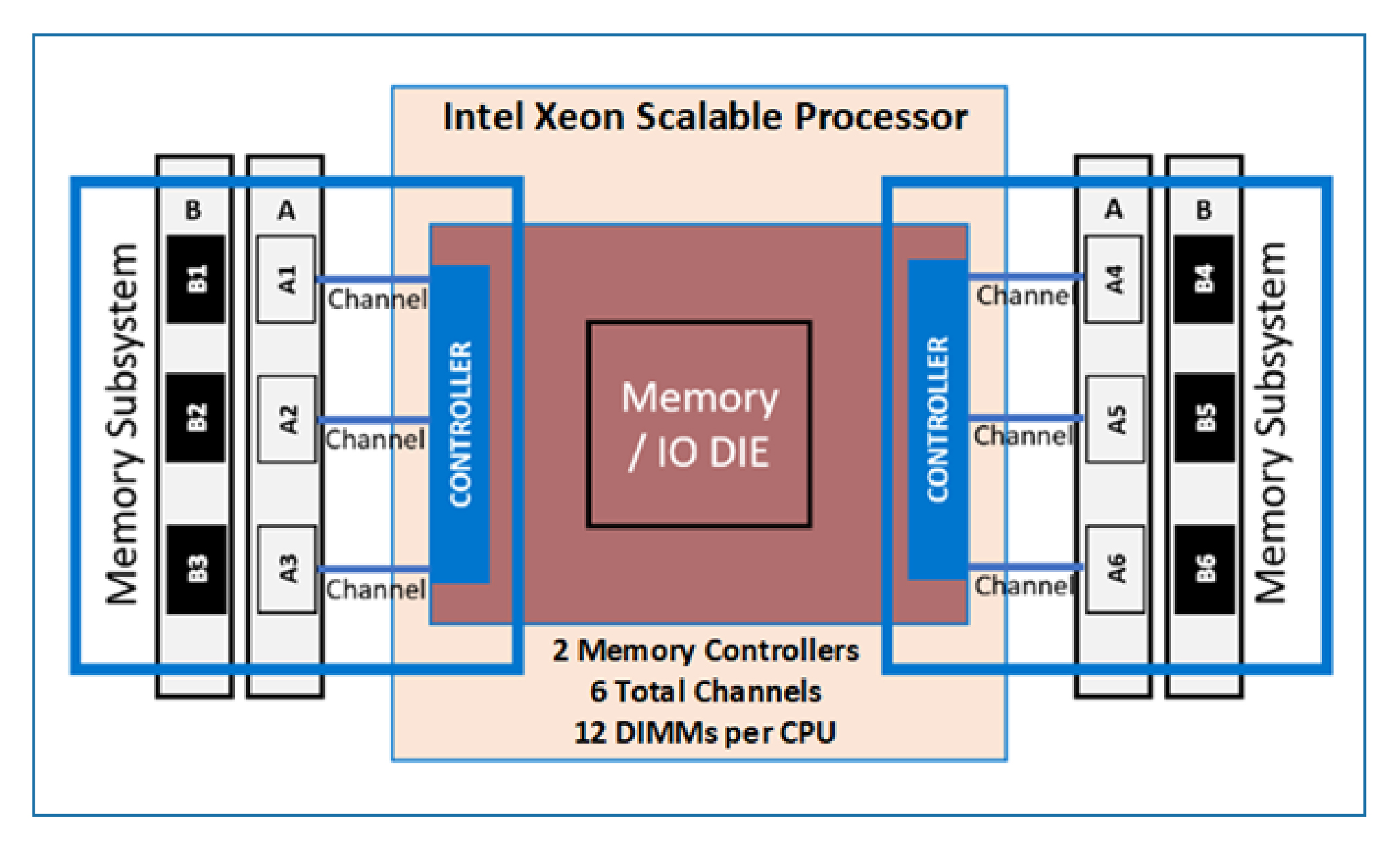 The memory subsystem performance depends on the CPU model since the memory controller is integrated with the processor, and the speed of the processor and number of cores also influence memory performance.

In previous generation systems, the processor supported four memory channels per socket. This led to balanced configurations with eight or sixteen memory modules per dual socket server. Configurations of 8x16GB (128 GB), 8x32GB (256 GB), 16x32 GB (512 GB), 16x64 GB (1024GB) were popular and recommended NOT SO for14G Servers, these are unbalanced configurations and can lead to poor memory performance. 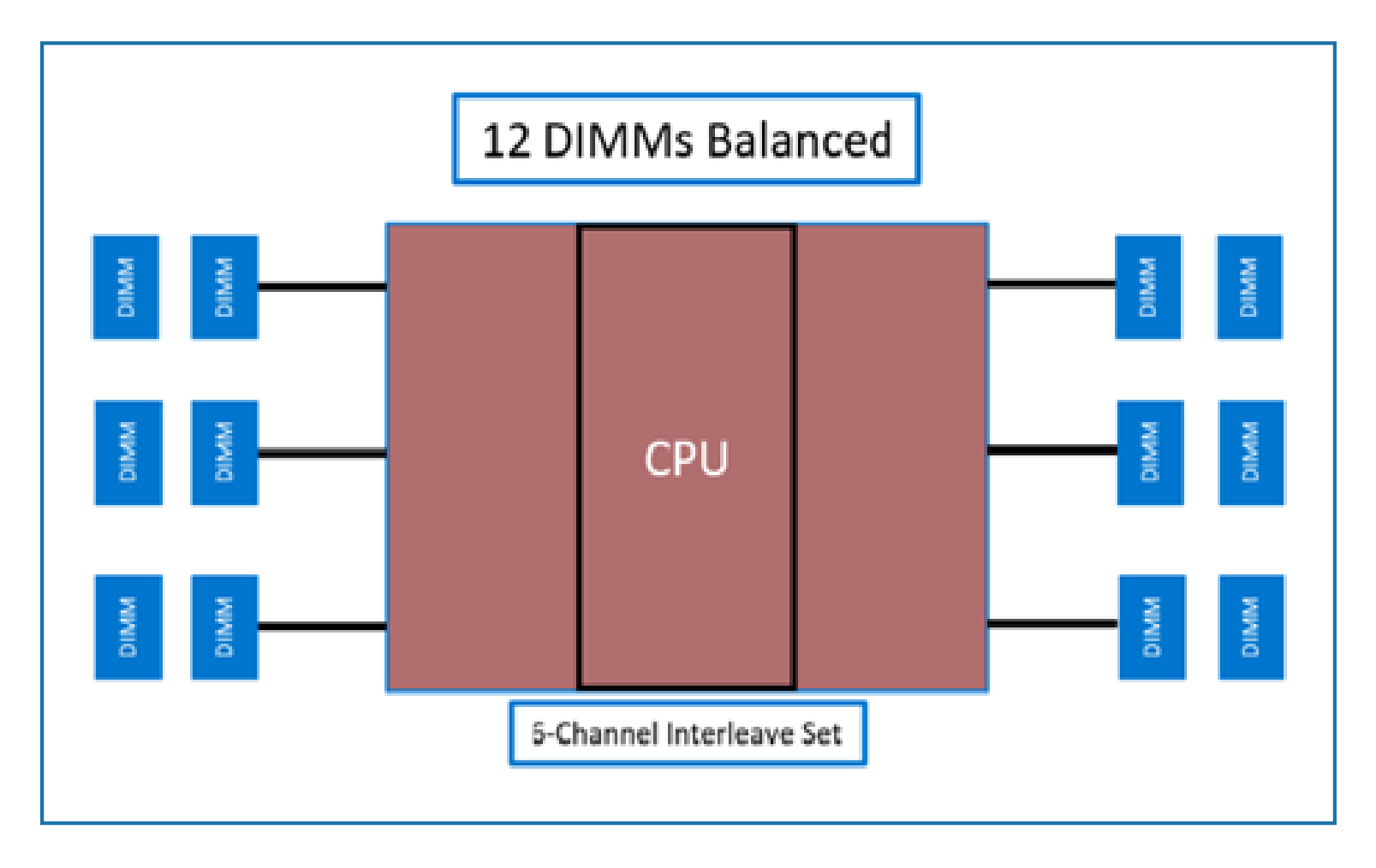 In previous generation systems, the processor supported four memory channels per socket. This led to balanced configurations with eight or sixteen memory modules per dual socket server. Configurations of 8x16GB (128 GB), 16x16 GB or 8x32GB (256 GB), 16x32 GB (512 GB) were popular and recommended. With 14G these absolute memory capacities will lead to unbalanced configurations as these memory capacities do not distribute evenly across 12 memory channels. A configuration of 512 GB on 14G Skylake is possible but suboptimal, as shown in Figure 4. Across CPU models (Platinum 8176 down to Bronze 3106), there is a 65% to 35% drop in memory bandwidth when using an unbalanced memory configuration when compared to a balanced memory configuration! The figure compares 512 GB to 384 GB, but the same conclusion holds for 512 GB vs 768 GB as Figure 2 has shown us that a balanced 384 GB configuration performs similarly to a balanced 768 GB configuration. 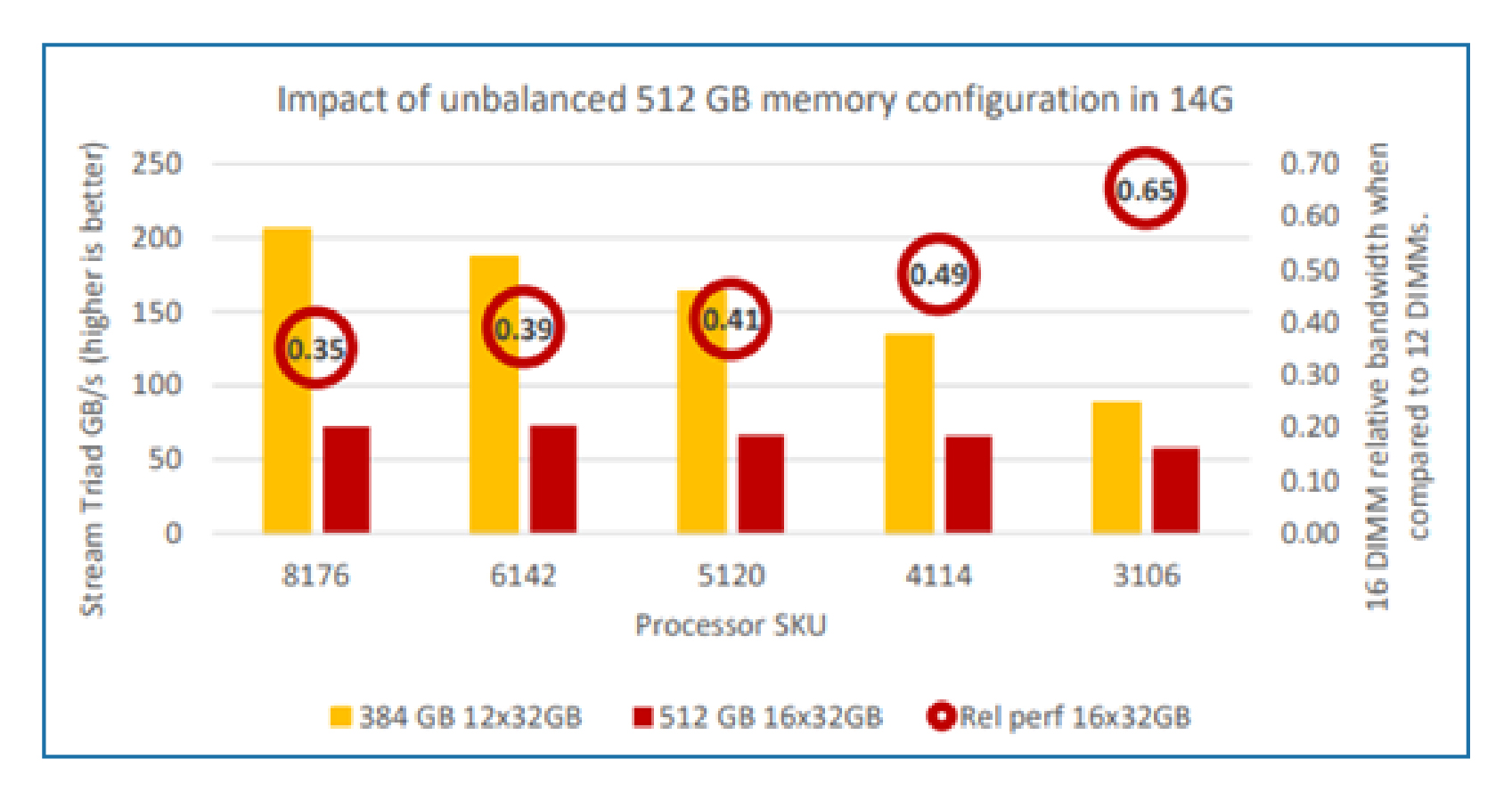 The question that arises is - Is there a reasonable configuration that would work for capacities close to 256GB without having to go all the way to a 384GB configuration, and close to 512GB without having to raise the capacity all the way to 768GB? Dell EMC systems do allow mixing different memory modules, and this is described in more detail in the server owner manual. For example, the Dell EMC PowerEdge R640 has 24 memory slots with 12 slots per processor. Each processor’s set of 12 slots is organized across 6 channels with 2 slots per channel. In each channel, the first slot is identified by the white release tab while the second slot tab is black. Here is an extract of the memory population guidelines that permit mixing DIMM capacities.

The system supports Flexible Memory Configuration, enabling the system to be configured and run in any valid chipset architectural configuration. The following are the recommended guidelines for installing memory modules:

So, the question is, how bad are mixed memory configurations? Below are tested valid “near-balanced configurations” as described in Table 1, with the results displayed in Figure 5. 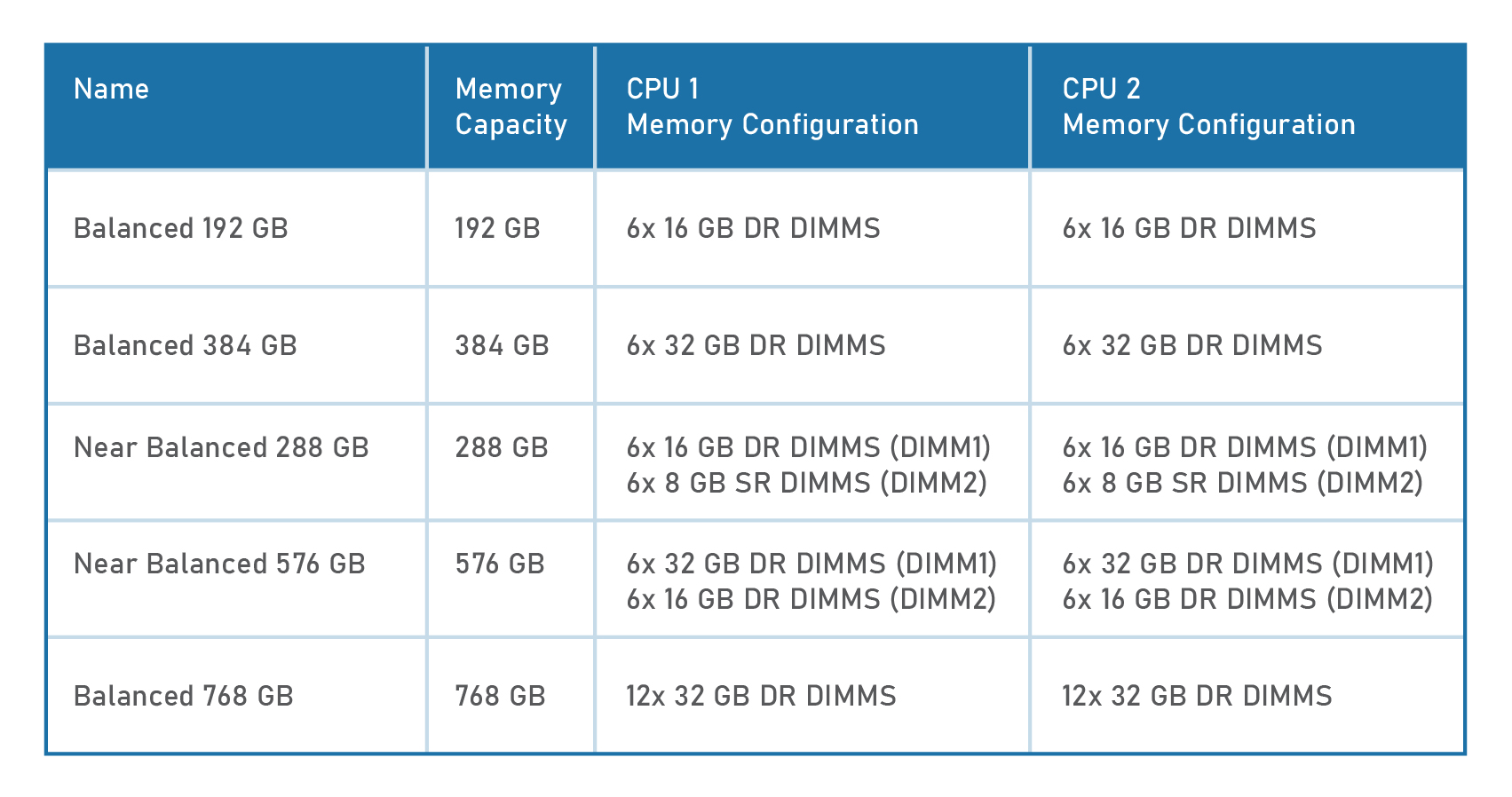 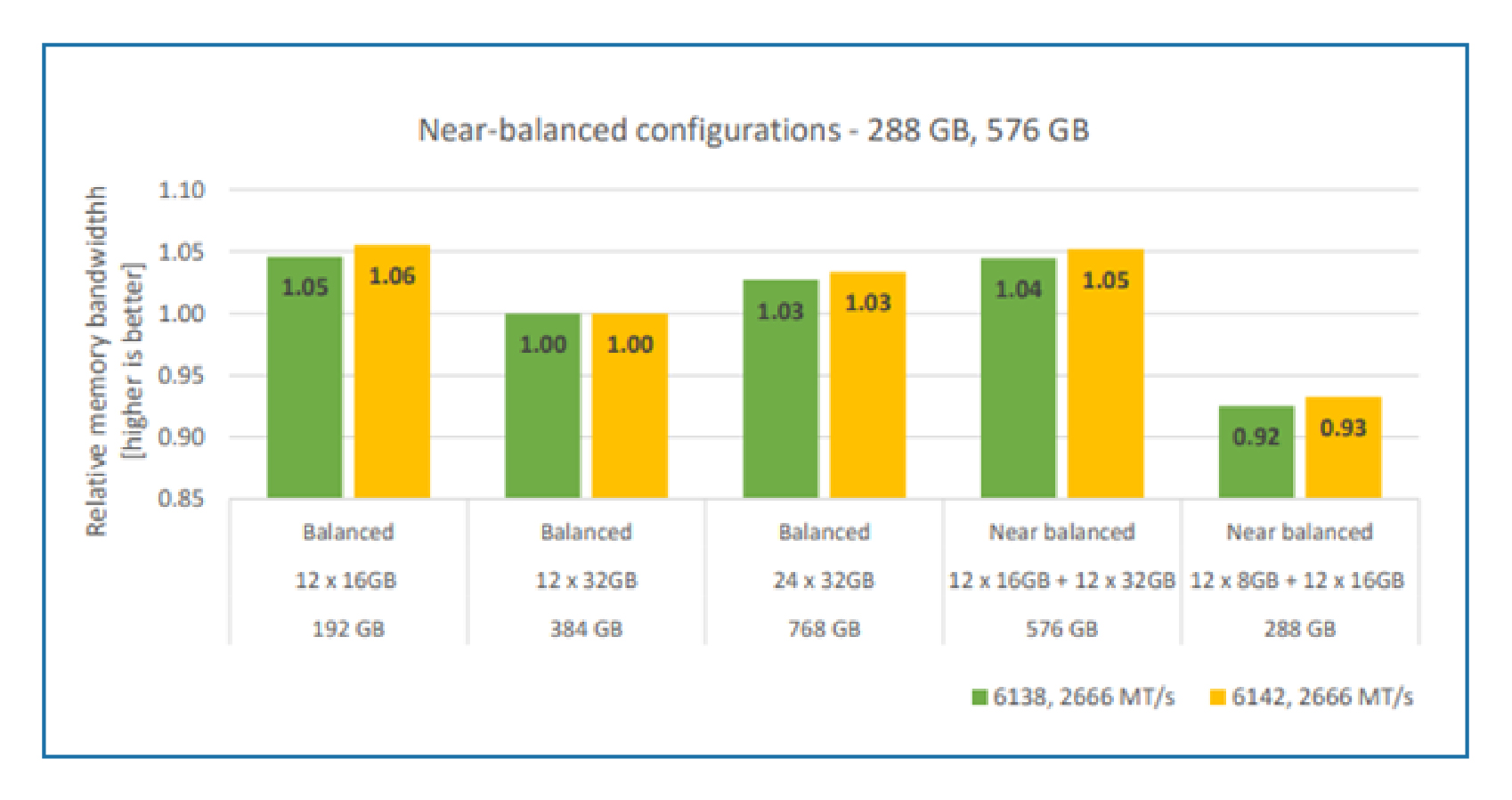